How to Use Live Video to Build Your Business: Infographic

Live video draws attention better than text and static video — have you tried it? This infographic breaks down the stats and reveals how you can implement live video for your own business.

Take Switcher for a spin

Switcher Studio lets you create and live-edit pro-quality multicamera live video with devices you already own. Create an account today to get a free 14-day trial.

Working with a team? Equip your team — request your demo of Switcher for Teams today. 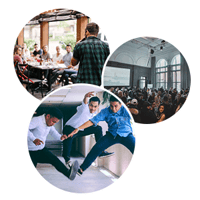 How to Use Live Video to Build Your Business

What Are People Watching Live?

In 2019, YouTube’s live streams from Coachella garnered 82 million live views during the first weekend of the festival.

Why You Should Go Live

Only 20% of people finish reading an article, most only read the first ¼. And 69% of users prefer video to text when learning about a brand.

Choose the platform that best fits your business, or try them all:

Getting Started With Live Video

Switcher lets you record and stream to Facebook, YouTube, and LinkedIn all in one app. Are you ready to take your business live?