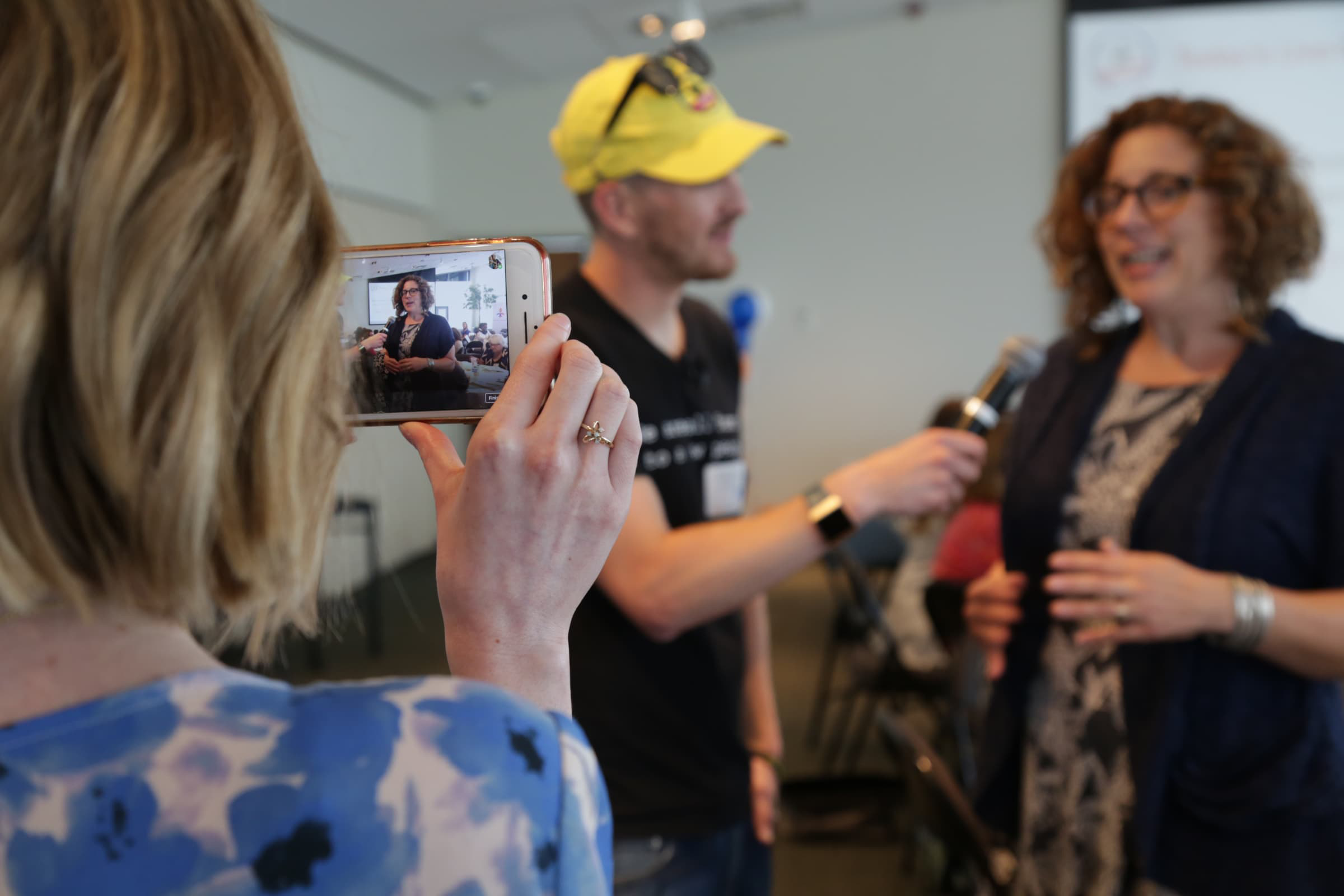 Stories are at the very heart of nonprofit work, driving both the missions and the funding. From donors and philanthropists to community members and recipients, everyone involved has a story. To tell these stories is both the high honor and the tall task of nonprofit staff — a task the Community Foundation of Louisville staff is accomplishing through live video. What do you do? is a tricky question for those at the Community Foundation of Louisville — because they do so much. “We call ourselves a force for good,” says Molly Melia, marketing and communications associate for the foundation. “We work to connect nonprofits, donors, and civic partners to create lasting impact in the community.”

That entails both hosting programs that provide funding opportunities to other nonprofits and working with donors to create funds that serve the community. It also entails communicating all of this to the public.

“What we do is so broad,” says Molly. “The challenge is always being able to make people aware of how much we do and what services we provide.”

Conveying their work clearly, despite its breadth, is critical to gaining donations. And it’s never more critical than leading up to Give for Good Louisville, the foundation’s annual 24-hour online giving day, which raises funds for hundreds of local nonprofits each year.

After meeting social media educator (and now a fellow Switcher user) Chris Strub in 2016, the Community Foundation staff realized that live video could be the ideal medium to promote their giving day, allowing them to convey their work and share stories of those involved while engaging viewers in an interactive way.

“Chris had a meeting at the Community Foundation, and he talked to us about the importance of livestreaming,” says Molly. “At that time, we did no livestreaming, none whatsoever. ... He said, ‘You're doing nothing if you're not in front of the camera, if you are not telling people’s stories all of the time.’ It was something that really hit us.”

The Community Foundation started using Facebook Live right away, launching a weekly live video series called “Getting to Know the Good.” For this series, they invited local nonprofits participating in Give for Good to come to their office for interviews.

The next year, in 2017, they took the show on the road, visiting nonprofits and streaming live on-site. They also livestreamed parts of Give for Good 2017, inviting Chris Strub back to serve as a co-host for the giving day videos. By 2018, they wanted to up their live video game again.

“[Having used] Facebook Live for a year … we knew that it was a great success, and we knew how much people loved to see the stories and to hear about nonprofits and what they're doing in the community, but we wanted to take that to the next level,” says Molly.

A fortuitous Facebook comment revealed how they could do so. “In January of 2018, somebody commented [on one of our live videos] and said, ‘We love what you are doing, how you are getting to know nonprofits in our community. Have you heard of Switcher Studio?’”

The Community Foundation soon saw that Switcher’s live video production platform was an obvious fit for their needs. “It became a perfect partnership for us to try as we started leading up to our 2018 giving day,” says Molly. 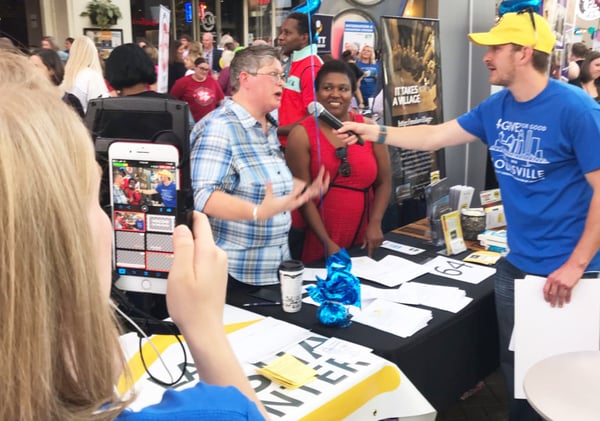 Molly Melia, Marketing and Communications Associate for the Community Foundation of Louisville

With its text overlay tools and live-editing features, Switcher Studio allowed the Community Foundation to improve their “Getting to Know the Good” videos by including additional information and CTAs, which were critical to driving more web traffic and donations for each of the nonprofits they featured.

“Switcher Studio has all of these great capabilities: being able to [show] somebody’s name and their title and the organization that they work with, [show] a website when we're trying to drive traffic to a specific place. That was something that we never had the chance to do before,” says Molly. “That was crucial to the improvement of what we were already doing.”

The ability to include images and prerecorded footage in their Switcher productions was also a game changer for the foundation’s unique needs. “Something that we got to do with Switcher Studio that we've never been able to do before is insert B-roll,” says Molly. “When you work with different nonprofits, they might have participants whose faces you can't show.” In these cases, showing photos or prerecorded footage of the nonprofits’ work allowed the foundation’s staff to convey the mission while being sensitive to people’s privacy.

Going behind — and in front of — the camera

The ease of use of the Switcher platform meant that anyone could serve as participants and producers. “We invited different staff members to actually co-host [‘Getting to Know the Good’ episodes] with us — people that don't usually ever step in front of a camera,” says Molly. “It allowed us to show nonprofits that you don't have to study marketing or broadcasting to get in front of a camera and to show your passion about something.”

The mobile nature of the platform also kept livestreaming from feeling intimidating. “We all have phones in front of our faces all the time, so being able to use Switcher on your phone is something that makes everybody more comfortable onscreen,” she continues. “And it makes it more achievable to push out video content that can really make a difference. …  I am not tech guru by any means, and sometimes getting behind the camera can be scary, but the Switcher app is so user-friendly.”

After using Switcher Studio for months to stream their weekly live series, the big day arrived: September 13, 2018, the fifth annual Give for Good. More than 500 local nonprofits participated, and the Community Foundation livestreamed all day, going live every hour on the hour. They used Switcher Studio to add additional content, text, and CTAs to their videos — all to drive traffic and donations on their website.

“We used Facebook Live all throughout the 24 hours on the giving day, and with Switcher Studio … we always had the website [URL] showing, says Molly. “For us, the most important thing on September 13 was to drive people to Give for Good Louisville to donate.”

They also sent correspondents out to capture what was going on with the participating nonprofits during the day. “Switcher Studio allowed our staff to be mobile on Give for Good Louisville, to go out and meet the nonprofits and show the different things that they were doing to engage their supporters on that day.”

In total, the Community Foundation team created 26 videos in 24 hours with Switcher.  The platform enabled them to edit while streaming, publish instantly, and move on to their next video with no post-production turnaround time. Traditionally, 26 prerecorded videos would take weeks of editing time. And even more importantly, prerecorded video wouldn’t have facilitated the real-time interaction that was crucial to the fundraiser’s success.

Impressed with the foundation’s coverage during and leading up to the giving day, a local news channel picked up all of their live videos. “WAVE 3 News actually saw one of our first ‘Getting to Know the Good’ episodes that we did with the Switcher app,” says Molly. “They loved the functionality, loved the stories that we were telling, and offered to sponsor us for the 2018 Give for Good Louisville. They shared every single one of the Facebook Lives that we did leading up to the giving day and on the giving day … just to extend the range of people that were seeing that video and driving traffic to make the difference.”

Molly Melia, Marketing and Communications Associate for the Community Foundation of Louisville

Throughout their 2018 ”Getting to Know the Good” series and Give for Good Louisville, the Community Foundation’s videos received 18 million impressions, an increase of 4 million over the previous year. And those impressions translated into much-needed donations.

“We were able to raise $5.4 million in 24 hours for over 500 nonprofits,” says Molly. That was nearly $1 million more than the previous year — an increase due in part to their use of Switcher. “While we were getting to raise money, we are getting to show the faces and the people and the missions behind all of these nonprofits that do so much good for our community,” says Molly.

As a nonprofit that serves other nonprofits, the Community Foundation is often tasked with helping other organizations learn how to share their work and their missions, and now they recommend Switcher Studio.

The affordability of Switcher also makes it a natural fit for nonprofits. “A lot of the time, nonprofits feel like they are constricted by budget, and so maybe they only get one video a year, one video every 5 years,” says Molly. “Switcher Studio allows you to really create content all the time — and content that people are excited to watch.

“Switcher Studio has allowed us to produce more than 40 videos this year,” she continues. Typically, it would cost tens of thousands of dollars to hire an outside agency to produce this much content. But with Switcher, the Community Foundation was able to produce these videos in-house — and drive record-breaking donations as a result.

Most importantly, Switcher has helped the Community Foundation share the stories of local nonprofits, which is critical to ensuring these organizations can continue to do their work moving forward. “There are so many stories to be told,” says Molly. “Switcher has allowed us to start telling the stories and telling them more often.”

See what you can stream with free 14-day trial of Switcher Studio. Sign up today — no credit card required.