Life Church is committed to reaching their Miami, Florida, community with the gospel — and they’re embracing livestreaming to aid in that mission. What they’ve found is that livestreaming with Switcher Studio takes their worship services far beyond Miami, expanding their reach exponentially.

Planting a church in Miami presents unique challenges. Though known for its sunshine and warm temps, Miami is prone to flooding and unpredictable weather. Plus, the same big-city attractions and beautiful beaches that drew 16 million tourists to Miami last year tend to draw locals away from churches on Sunday mornings. That means that, when it comes to reaching people with the gospel, churches in Miami are faced not only with the typical obstacles of people’s busy schedules and preconceived notions about church but also with competing attractions and even, at times, the skies themselves.

But that hasn’t stopped Life Church from committing to the area, growing a local church body, and thinking strategically about how to reach the Miami community.

The church, which launched in a movie theater in 2009, had grown into their own space by 2011. They now have 120 members, three people on staff, and weekly attendance ranging from 75 to 200. And they’ve found that livestreaming their worship services lets them triple that weekly reach.

"God has called us to share the gospel to the ends of the earth,” says associate pastor and worship leader Alexander Sosa. “And if people are staring at their phones all the time, why not invade that space?”

From Filming to Livestreaming

Before Life Church was livestreaming, they were recording services the old-fashioned way — both to create a shareable sermon library and so the pastors could watch and improve their own preaching. But the process was taxing. “We were recording services with handheld cameras,” says Alex. “Our pastor [David Mayoral] would have to take that video, transfer it to a computer, process it, go on Final Cut Pro, cut the video, and upload it on YouTube. As a bivocational pastor, that’s a challenge.”

Their filming process wasn’t just time-consuming — it was also expensive. When David got a new computer, suddenly their old camera was incompatible. “We had to choose,” says Alex, “Do we spend a bunch of money on a new camera? Or do we just stop filming?”

It was this question that led Life Church to find Switcher Studio, a multicamera livestreaming and live-editing tool for iPhones and iPads. Switcher would allow Life Church to reach people with their church services in real time on Facebook Live, while cutting costs and production time dramatically.

In this regard, Switcher stood in stark contrast to other similar tools Alex had seen — like the livestreaming setup of a nearby megachurch. “I saw how complicated their setup is for switching between cameras,” he says. “I was just overwhelmed by that. I started doing research on that, and it was upwards of $10,000 for a simple setup. And then I started looking at other products that have similar features … but you had to buy a bunch of different equipment. You had to buy cameras. It was cheaper than the $10,000, but it was still going to be a $2,000 investment.

“Then I came across Switcher and saw that it worked completely with iOS devices.” That was the game-changer.

Getting Started with Switcher

Alex started a free trial of Switcher and took it for a test run — initially trying out camera syncing and text assets. “I first tested some stuff at home … connecting it to my phone and my iPad. I was really impressed by the lower thirds and the ease of setting up different text graphics. I was like, ‘Man, this is really easy.’”

After testing the platform at home, Alex wanted to use Switcher to livestream Life Church’s services. As a pastor and worship leader, he was already tied up on Sunday mornings, so he reached out to 17-year-old Bryan Cabrera, a longtime member, about managing the livestreams. Bryan now serves as the live production coordinator.

“I needed somebody I could count on who was always at church, reliable, and a quick thinker,” says Alex. “And there’s where Bryan came in. … Bryan does all of our setup on Sunday morning before the service starts.” Their setup includes three iPhone cameras as well as an iPad, which they use as the main switching device. The pastor imports his slides into Switcher ahead of time, so setting up the entire stream — iPhones, iPad, and audio — takes only about 20 minutes on Sunday morning.

And because Switcher does use iPhone and iPad cameras, Life Church hasn’t had to invest in gear to create their multicamera stream. “We didn't buy other phones,” says Alex. “We use our team's phones. Our pastor doesn't need his iPhone when he's preaching. … I bought a tripod here, a little cable connector there, but we basically had everything we needed right from the get-go.” Switcher also lets them livestream with limited hands: all the synced iPhones can be controlled from the main device. “It's basically set it and forget it and work from the iPad,” says Alex.

In addition to using Switcher’s multicamera feature, Life Church employs many of Switcher’s other live-editing tools. They display their logo as a corner bug on top of their videos, roll in prerecorded videos for openers and special segments, and use animated lower thirds and text templates to introduce speakers, all while streaming the production live.

Bryan also loves the ability to show multiple sources at once with picture-in-picture and side-by-side multiview layouts. “It's very easy to switch camera angles,” says Bryan. “And I like the multiviews. … Instead of only being able to show a slide, I can show our pastor preaching and the slide.” 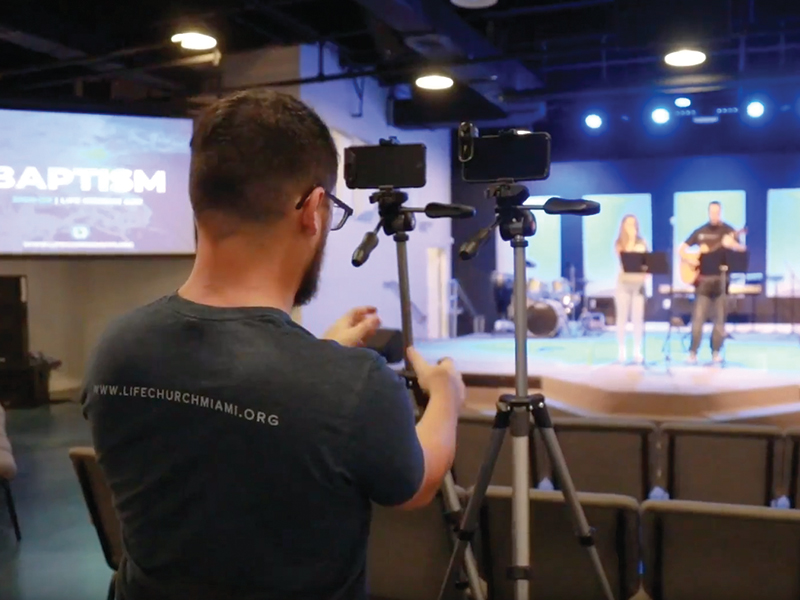 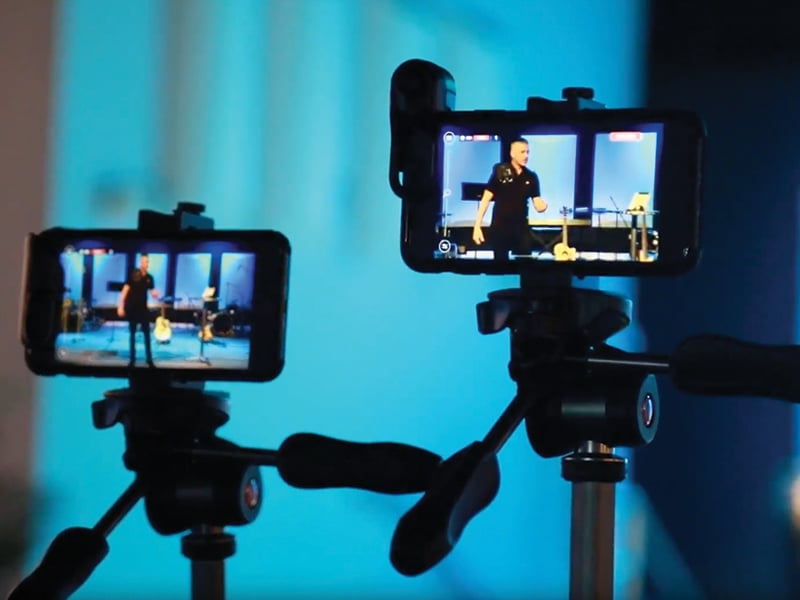 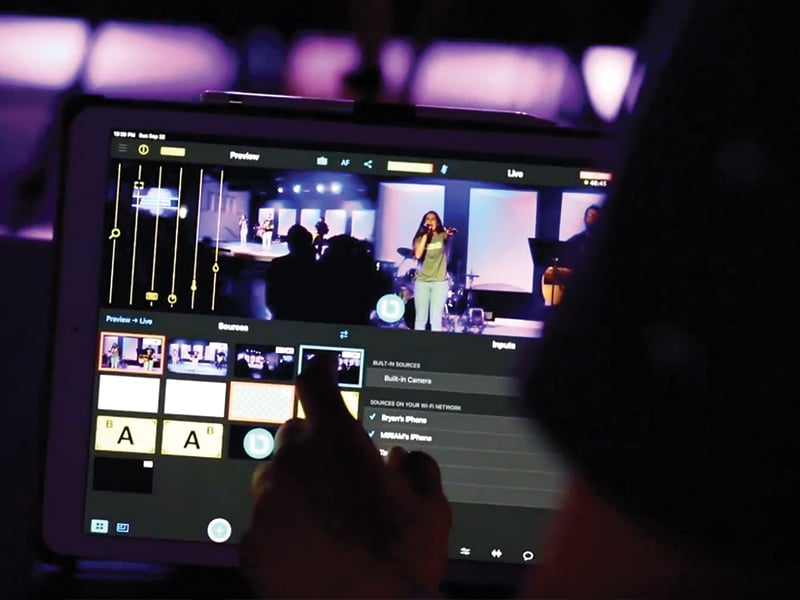 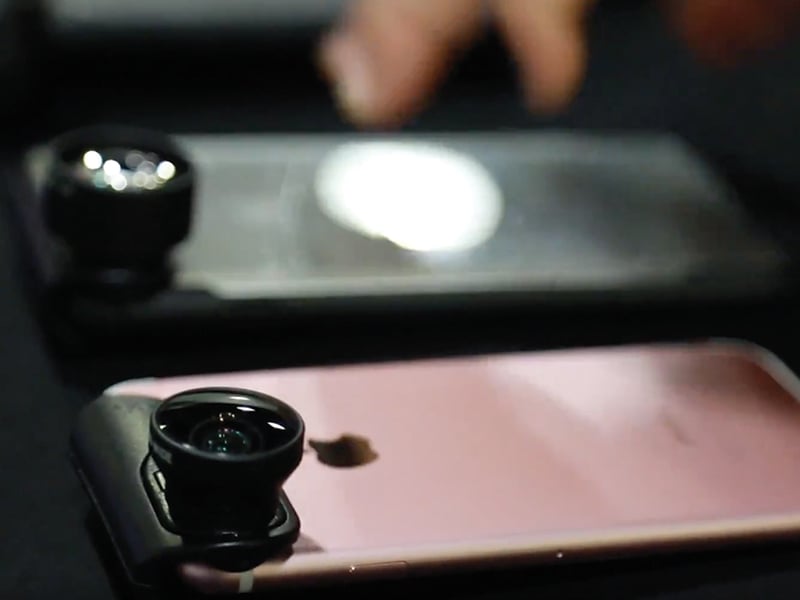 Embracing tech to expand the
reach of church

Some churches may worry that livestreaming would disincentive people from attending a service in person, but Life Church hasn’t found this to be the case. They see their livestreamed services not as a replacement for gathering together, but as a supplement, a way to reach more people — and, therefore, a natural fit for their mission.

“You cannot easily replace the community that you get by being together, and I don't think people will trade off that in-person fellowship and just start watching online,” says Alex. “But you will reach people who normally would not step foot in your church. Now they see what a service is like. All the preconceived notions of what church is like, which may have been negative, can be replaced by the content of your livestream.”

Life Church’s livestreams on Facebook are consistently reaching upwards of 300 to 400 people, with some services reaching more than 600. Their most widely viewed livestream so far was shared 16 times and reached 1,400 people. More importantly, their videos are getting tons of engagement — sometimes more than 400 engagements per video — which indicates that the people reached are actually paying attention. “There are a lot of people who don’t even live in Miami that we’re able to reach,” says Bryan.

“We have people with family members in Chicago and New York who are watching the livestream and church members who love our church but moved for work,” adds Alex. “They’re staying tuned.” These online visitors are getting to hear sermons, participate in worship, even bear witness to baptisms, like those streamed on Easter Sunday this year.

The livestreams are also prompting online contact submissions, and they’re bringing more people through the physical doors of the church. “We’ve had a couple people who said they checked out our livestream before they came because they were new in town,” says Alex. Being able to visit online like this can cut down on the length of time it takes people to find a church.

In addition to using livestreaming to expand the reach of their Sunday services, Life Church has used Switcher to create online services on Sundays when in-person services are canceled due to weather. “We were in the path [of Hurricane Dorian] near Miami,” says Alex. “We had canceled church prematurely just in case, but we were still able to livestream, which is awesome.”

“It took barely any prep,” he says, explaining the process. “On Sunday morning, I got an awesome sermon video from Open through Life.Church. … I filmed a quick intro video, I pushed the other videos that we use as our bumpers, and we went live. So literally in 30 minutes, I packaged the service.” On a Sunday when they couldn’t even meet for a service, Life Church reached 420 people on Facebook.

Alex even used Switcher’s on-screen Facebook comment feature during that stream to display comments in the video in real time, fostering fellowship among everyone participating at home. ”I love that we can share those comments because that creates a sense of community online — that people are seeing that other people are watching,” says Alex.

Because Switcher isn’t limited to live video, Alex also uses it to film commercials for upcoming events, letting him create something polished without any post-production. “I use it to film those little quick videos without having to do a ton of editing, saving a lot of time,” he says.

Undoubtedly, Switcher’s quick and easy video production tools are valuable. But for Life Church, what’s most important is Switcher’s ability to amplify their message.

“Our big goal as a church is to stay true to what God has called us to, which is to equip believers for the work of ministry,” says Alex. This means sharing the gospel to the ends of the earth — and helping others do the same. “We don't want a church where a couple people do everything. But we want to put the tools in everybody's hand to go out and do ministry — whether it be missions, planting churches. It's not the pastor's job. It's the church's job.”

In this regard, Switcher, too, is a tool for ministry, helping Life Church reach more people with the gospel and convey what their church stands for.

“Switcher is giving us that exposure — people get to see what our church is about before they come,” says Alex. “We’re not just talking about Jesus; we want to live like him.”