As a newspaper company, JPIMedia is leading the way for traditional media companies transitioning into digital. They're monetizing their digital channels by livestreaming sponsored content with Switcher Studio — and advertisers and audiences are loving it.

Graham Walker started his journalism career 40 years ago on an Olympia typewriter.

“Now, literally, my office has become my iPhone,” he says.

During his time in the field, the journalist has done everything from reporting and editing to videography and marketing. Though his tech and roles have changed over the years, the heart of his job has stayed the same. “I’m storytelling. Whether I'm writing a tweet or writing a 1,500-word print piece or livestreaming, I’m just storytelling.”

These days he’s drawing on his storytelling experience and multimedia expertise for his work at JPIMedia, which is based in Yorkshire in the North of England (Graham works out of Sheffield). As commercial content editor for JPI, Graham plays a crucial role in securing funding for 45 of the media group’s 200 newspaper titles, which reach a combined audience of 35 million people throughout the U.K.

Though a newspaper company, JPI takes a digital-first approach, which means they’ve faced the same monetization questions as many other traditional media organizations moving into digital. “We’re still having to get to that point where we're creating more revenue through digital than we are print,” says Graham.

One way the media group does this is by relying on sponsored content, a.k.a. advertorial content, which runs in JPI’s channels alongside traditional news and editorial content. Sponsored content can be a win-win for publishers and advertisers — ensuring funding for journalism and ensuring wide reach for advertisers. It also benefits audiences, who’ve been found to prefer the editorial format to that of traditional ads.

Graham works with advertisers to create this sponsored content for JPI’s newspaper brands, focusing largely on the Yorkshire Evening Post and the (Sheffield-based) Star. Though he offers sponsored content placements in their print, digital, and social channels, he says nothing performs better than video streamed to Facebook Live.

“Facebook Live is our biggest form of audience reach,” says Graham. “It’s the cream of the pile.” To make their livestreams look as polished as traditional news content, Graham has turned to Switcher Studio. First though, he was just experimenting with the Facebook Live platform.

“I remember doing my first Facebook Live stream — it was 2016. It had only just come out, and I said to folks in the office, ’I'd love to have a go at it,’” he says. “It just happened that we had an adventure film festival being promoted by a tightrope walker [walking between] two buildings in the middle of Sheffield. … So I went to cover it. What I know about tightrope walking, you could write on the back of a cigarette packet, but I managed to commentate throughout — watching up and seeing this happen about 150 feet above us. I must admit, it looked terrifying to see someone doing that on a city landscape.

“Then I looked at the comments, and I couldn't believe literally thousands of people were watching — not just down the road, but as far away as Australia, the other side of the world from us. … So right back then, I thought to myself, we're on to something here.”

To make the most of this powerful platform, Graham knew he needed something that looked more professional than a single shaky phone — something that could match the quality expected of respected name like JPI. After streaming the tightrope walker, he asked himself, “How could we develop that from being a shaky mobile phone to something more TV-like?”

It was this question that led him to Switcher Studio. Though he was initially looking at livestreaming hardware that could be bolted onto a video camera, he realized that Switcher provided more flexibility — letting him film, edit, and livestream from a single iOS device while also connecting to other iOS devices to capture more angles.

“[At first] I was a little bit put off that I could only use iPhones, but I started looking a bit deeper, and I realized that you could actually connect up to the DJI Osmo Gimbal and control all [your iOS cameras] using the Switcher iPad. It meant that in terms of cost-saving, in terms of cameramen, I could be nine cameramen and still have the flexibility of moving the cameras around to create different angle effects. I just thought, this is crazy.”

Though originally a devotee of traditional video cameras, Graham has become a convert to the iPhone camera, especially when it’s coupled with the production power of Switcher Studio. “[To say] ‘Oh, it’s not a real camera’ is ridiculous,” he says. ”It's more than a real camera. To be honest with you, the iPhones are performing better now than any video camera that I've ever owned.”

Now Graham is using Switcher to create amazing, livestreamed videos for his newspapers’ Facebook pages. And advertisers and audiences can’t get enough of them.

“A classic example [of a sponsored content video] is something that I did yesterday at the Sheffield FlyDSA Arena, which is our big music concert venue. We got Disney on Ice there — I did a half-hour livestream, a behind-the-scenes tour and preview of the show. As of this morning, I’d already pulled about 15,000 views.”

But views aren’t all his livestreams are driving. The brands sponsoring his content are also getting major sales during the livestreams themselves, and that’s what keeps them coming back for more. “The best way of measuring success is people voting with their feet, and that's buying the product while you're actually online,” says Graham.

“I did a car launch in a car sales showroom … and while we were doing it, a guy rung up and bought a car on the back of it. Well, what better endorsement can you get than that? I've [streamed] bands playing acoustic sets at arenas, and the phones have gone off the hook with people ringing in to buy tickets. … People ring in restaurants while we're in there showing off the restaurants, wanting to book tables. ‘Oh I'm watching online and it looks fantastic. Can we book a table tonight?’ We get that on a regular basis.”

Switcher’s live-editing features are playing a role in making these sales possible. During the car showroom stream, for instance, Graham used Switcher’s prerecorded video feature to roll in footage from an earlier test drive. He also uses lower thirds to introduce speakers and emphasize information, multiview layouts to show multiple camera angles at once, and graphic overlays (whether full-screen or corner bugs) to show sponsor logos and relevant images. 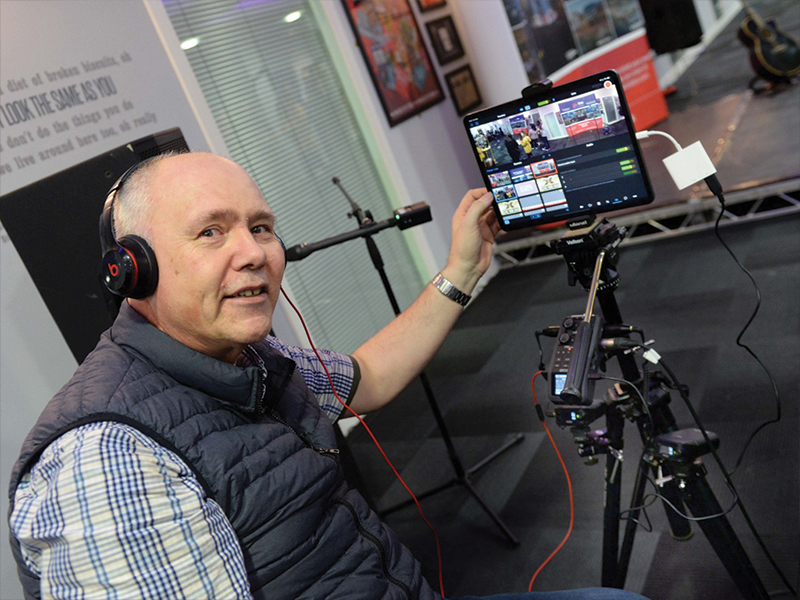 Graham sees the value of a Switcher as a tool not only for sponsored content but also for traditional news content. That’s because it drastically cuts down production time, production costs, and manpower requirements. (Plus, Switcher’s RTMP hookup lets news organizations like JPI stream directly to their own websites’ video platforms when they want site content rather than social content.)

“In the good old days, you'd go out on a story. I'd get my notepad out, I'd make some notes, I'd go back to the office, and I'd write the story. ... It was a process, a long process. Then we’d produce a newspaper and sell it once a week.” says Graham. “Now literally, because of these fantastic tools of Switcher Studio, I'm able to rival leading broadcast companies. … I can fire up Switcher Studio on a multicamera system, and actually deliver a TV-quality presentation instantly.”

Though Graham started out using Switcher with just a single iPhone and wired mics, he loved it so much that he has since built out an entire kit. His kit includes an iPad for switching, 9 iPhones (tripod- and gimbal-mounted and controlled from the iPad), and an H6 Zoom that brings in audio from up to six wired or wireless inputs — plus a Netgear mobile hotspot and Google Wifi mesh routers that let him create a dedicated mesh network anywhere. And all that gear fits in a backpack and requires only one or two operators. “It’s all portable,” says Graham. “I literally walk into a building with everything I need.”

It’s also far less expensive than traditional broadcasting options. “A friend of mine has got this outside broadcast bus, a £200,000 [$260,000] outside broadcast unit,” says Graham. “He said to me, ’What you're doing out of a backpack, is this. You’re actually rivaling me in terms of what you can do here.’”

With tools like Switcher at their disposal, journalists and content creators are limited only by their imaginations, Graham notes. “Livestreaming has given the crown jewels of broadcasting to the public to use,” he says. “Now it's about having the imagination of how to use them. We can all have the tools, but it's what we do with them.”

For those with imagination, Switcher Studio provides the tools.

But, Graham warns, it can be addictive. “I know there's not a better product out there to do the variety of work that Switcher does,” he says. ”It’s just infinitely the best system on the market. … I'd strongly encourage anybody to dip their toes in the water. But watch out — it's difficult to back off once you've actually dealt in it. It’s such a great product.”