What to Know About Livestreaming Copyrighted Music 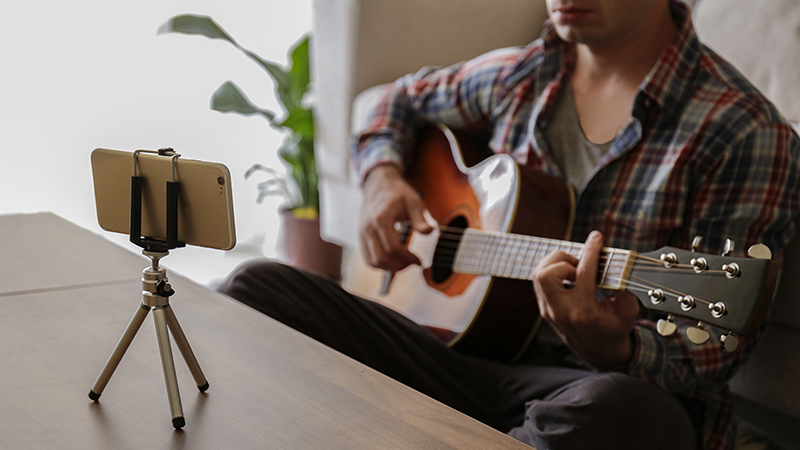 The biggest determiner of whether you are allowed to livestream copyrighted music on platforms like Facebook, YouTube, and Twitch is whether you’re streaming a prerecorded version of a song or a live performance version of a song. Streaming prerecorded music is much harder to get away with, even if you have attained the correct licenses. And streaming live music is much easier to get away with, even if you haven’t attained the correct licenses. This blog post will walk you through the rules regarding streaming copyrighted music on streaming platforms Facebook, YouTube, and Twitch.

How do you use copyrighted music on Facebook legally?

We have written about copyright rules on Facebook Live in the past, but the rules warrant another look as livestreaming continues to grow in popularity and Facebook continues to strike new deals with record labels.

As of 2018, Facebook had partnered with Warner Music Group, Universal Music Group, and Sony/ATV Music Publishing — i.e., the three biggest labels in the world — on licensing agreements that both enabled use of these companies’ music by users on Facebook platforms (for instance, in user-created videos) and paved a way for musicians to profit off the use of their music.

The amount of recorded music you’re allowed to livestream, however, is still limited, as Facebook delineated in a set of updated guidelines published in late 2020 on both Instagram and Facebook. Here are the main takeaways:

Facebook detects the use of copyrighted music through audio fingerprinting, which explains why recorded tracks and pure audio are way more likely to pose problems than live performances and short clips.

Since covers and live performances are unlikely to match with audio fingerprinting tools, this type of music streaming is generally safe from takedowns whether or not you’ve obtained the correct licenses. However, it’s still advisable to obtain the appropriate licenses (for instance, through ASCAP) for copyrighted music you’re planning to cover to ensure artists are compensated for their creations.

What about if you have obtained the legal rights to livestream copyrighted music on Facebook?

Of course, it is possible to obtain the legal right to stream prerecorded music on Facebook. For instance, lots of churches purchase CCLI Streaming Plus licenses in order to secure the rights to stream covers or prerecorded music from labels like Hillsong, Bethel Music, and Sparrow.

That said, the fact that you legally have the right to stream the music does not mean that Facebook won’t limit your videos by muting them, blocking them, or making them unavailable in certain areas. So though you have the peace of mind of knowing you’re not breaking copyright law, Facebook may still take down your videos simply because its takedowns happen automatically when recorded music is recognized.

How do you legally use copyrighted music on YouTube?

Like Facebook, YouTube automates flags and takedowns for videos that contain copyrighted music (or copyrighted video, for that matter) within what they call their Content ID system. So whether you have the right licenses to include copyrighted music in your live or recorded videos or you don’t, your content may still get what YouTube calls a claim or a strike. Understanding claims and strikes helps reveal what’s OK to stream and publish on YouTube and what isn’t.

In short, strikes are considered a big deal, and claims are not. You’re much more likely to get a claim for publishing a cover of copyrighted music and a strike for publishing a recording of copyrighted music. No matter what you’re publishing, it’s smart to have the correct licenses in place (even if that still means your videos get flagged automatically). It is also possible to dispute claims and request retractions for strikes, although you better have the appropriate licenses secured ahead of time if you attempt this.

This can happen even if you have the appropriate licenses to stream this copyrighted content. That’s because YouTube only knows you have the right licenses if the copyright owner adds your channel to their “allowlist” within the Content ID system. So in addition to getting the right licenses to stream the music in question, make sure the copyright owner has added your channel to their allowlist before you stream it.

Can you play copyrighted music on Twitch?

Of all three of these platforms, Twitch is the clearest about what’s allowed and what isn’t when it comes to streaming copyrighted music. Here’s the lowdown on what Twitch does and doesn’t permit in your streams and videos.

Other types of music content you’re not allowed to stream on Twitch include any music-listening shows, DJ sets, karaoke or lip sync performances, or visual music depictions that contain music that you do not own or have not licensed to share on Twitch.

If you are looking for copyright-free music for Twitch, check out Soundtrack by Twitch, which gives you access to a bunch of already-licensed music to use in your livestreams. Soundtrack uses multitrack audio, so it’s easy to remove this music from your recorded videos (VODs and Clips) after the fact — and it’s necessary because this music is only licensed for livestreams.

Much like Facebook and YouTube, Twitch will take down your videos if it becomes clear that you violated their policies. If a copyright holder thinks that you’ve used their work on Twitch without the right licenses, they can submit a DMCA (Digital Millennium Copyright Act) notification to Twitch. If the notification is legit, Twitch will remove the content and let you know about the notification, at which point you can submit a counter notification or seek a retraction. If you repeatedly break their copyright rules, your Twitch account may be banned.

Ready to start livestreaming your own music and performances to Facebook, YouTube, Twitch, and elsewhere? Start a free 14-day trial of Switcher Studio and create your own virtual concert using just iPhones and iPads.